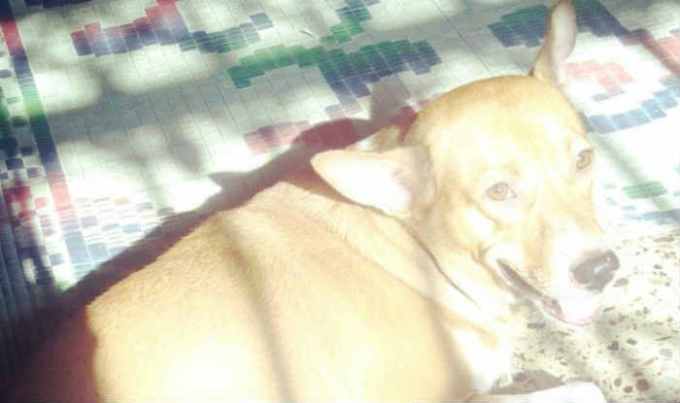 That’s Jimmy, we brought him home in April five years ago. We still don’t know when he was born, we adopted him from the street. This morning when I walked him I couldn’t do it without tears in my eyes.

Walking Jimmy has always been an important task of the day for me, I trained him so I walked him most of the times and not my elder brother. Parents hardly walk him because then Jimmy is the one in control and he is a total brat with my parents. I love walking him, I have used walking him as an excuse to walk away from family when I am angry or sad, I walked him so that I can forget about a girl or I wanted to think things over. He is the perfect companion, always laughing. Sometimes I seriously wonder if he knows my mood and his demeanour changes accordingly, if it does then I don’t know how he does it.

Last couple of days he has taken ill, he doesn’t eat and there is a sprain or muscle injury in right hind leg. He limps. Back when he was healthy, coming home I would be greeted by his sloppy kisses, the thumping of his wagging tail and infinite energy. It was either that reaction to my homecoming or he would fall down asleep because he is too sleepy and my coming home had disturbed his sleep.

But I know he was happy to see me. He looked cute, peaceful in his sleep. I have previously written about him here.

In the last two days, things have changed. Now he wouldn’t get up from the corner of the room that he has occupied. No wagging tails, no drooling tongue and no grinning welcome. He doesn’t even lift his head. My mom cries helpless looking at him. I sit next to him and comb his fur. He had lost weight I can see, his fur is thinning out. The light in his eyes is not the same, he looks in agony.

He is no longer happy to see me.

I took him to the vet and got him checked up. Vet suggested that I would let him rest and if he doesn’t start eating then I should bring him in again today evening. I was glad that mom didn’t come along too, she wouldn’t have kept her cool if she saw him wailing in pain.

He is eating but only sparingly, not with the same viciousness that he used to devour food. I kept my worries in check, kept my emotions in check because only I will be taking him to the vet, only I can stand by and not cry while he wails when injected. But it is so difficult not to.

Today I took him to walk. Usually he is full of energy, he would be the one to lead and I would be the one who is pulled by him. Today his trot was slower, clearly favoring his right leg. Head and tail drooped, he looked so old today. He was already past his energetic days, but today he looked frail.

Frail but stubborn because he still walked his usual long route. I tried to make him walk for less distance, give him rest but he wouldn’t. The whole twenty-five minutes this morning I looked at him walking and it hurt.

I still can’t stop the tears from welling up in my eyes, three hours after. He walked cautiously then suddenly decided he has to lead and try to canter, stop before he would hurt himself. While returning home, he took two steps and stopped, this happened a lot of times. I tried to carry him but he would wiggle out of my hands, he didn’t want to be carried. The bastard has his pride, he has to walk the same distance and he will walk back without my aid.

I tried to encourage him, telling him thoda dur (just a little far) but my throat clenched up in a try or two. All I could do was to touch his back and hope he gets the message. He always sits downstairs in the building compound and today he made no exception. He  sat on his hunches, ignoring my pull and stared at every passer-by. I know he was in pain, otherwise he would be grinning. Uncomfortable but he still was unwilling to drop his routine for some comfort. He sat on his hunches and he looked more proud today that on any other day.

Somehow we managed to climb to the third floor, he could barely walk now. I could barely watch. Inside the house he went back to occupy his new customary corner while I sat facepalmed telling myself that Jimmy would be alright

He will be alright.

14 thoughts on “Walking My Dog is Heartbreaking”