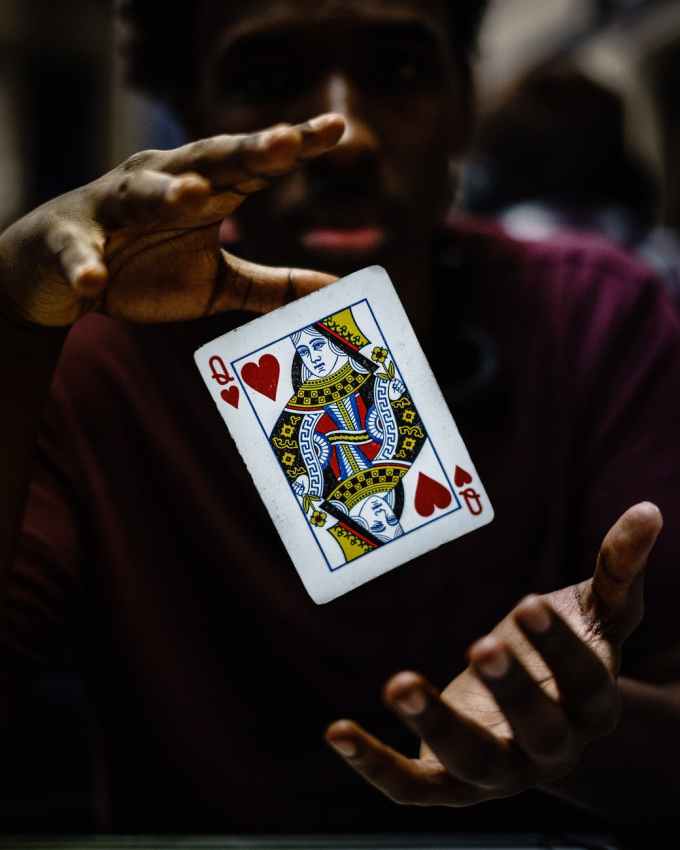 ‘This worked at home’

I looked inside the hat puzzled, ignoring my audience of impatient 8 year olds. There was supposed to be a deck full of Queen of Hearts in there. But, it was empty. I cocked my head sideways, frowning. How did this not work? I had enchanted the hat with all of the right ingredients, I tested the spell once before the show.

‘What is in your hat?’ the 9 year old birthday boy, Adam demanded to know. I snapped back into character and smiled. Yes, I was on stage and this wasn’t a time to be confused. I had to amaze my audience and so I would have to pull a finale from my ass.

Speaking of pulling something…

‘Well, I promised you a Queen didn’t I? But do you know what is better than a Queeeeennnn?’ I urged them to guess.

The kids kept shouting answers that were far beyond my ability to conjure. I had to stop them before they exhaust themselves too much. I mumbled a word under my breath and cast my spell.

‘A RABBIT!!’ I shouted as I pulled one out of the hat. The children exclaimed and started clapping. Luckily, they never realized that my spell hadn’t worked.
–

‘…, I don’t know what went wrong. I apologize for the mess up.’ I explained to the host of the party. Mac Andrews was a middle aged hedge fund broker who was on his 4th beer at his son’s 9th birthday party.

Yes, I was counting. The more they drank, less there would be left for me. I looked over Mac’s shoulder and I could see a whole table arrayed with beer bottles. Parents of other children were near the table like vultures using me as an excuse to get away from their children.

‘Adam loved your show. So did the other parents, they said you were amazing for a woman. After you finished, he said to me he wanted to be real magician like you.’ He took a long sip of his beer.

I smiled despite what he had said. I inspired someone to take up arcane arts?

‘So I am wondering where I can buy materials for the tricks you performed.’

‘Tricks?’ I asked, my attention snapping back at him.

‘Yeah tricks. Like how did you change color of that deck of cards? Or how was the bunny hidden in your hat?’

I glared at him.

‘I am happy to pay extra if needed.’ He quickly added.

I don’t want to remember what I did after that. I am sure Mac won’t remember anything from the night either.

I got out of the shower and dried myself. Looking at my reflection in the mirror, I asked myself if I have it in me to actually be a mage. It won’t be the first time I have changed careers. It won’t be the only time I changed something either. I snapped my fingers and my shoulder length hair changed its color from orange to blue.

I changed my hair frequently. I kept moving houses, without any forwarding addresses so that my ex boyfriends can’t find me. Now, as I am finally trying my best to stick to magic, I kept making mistakes.

I heard the floorboard squeaking.

No one has the key to my apartment. I quickly fasten the bathrobe around me and grabbed the burning candle currently permeating my bathroom with fragrance. I remind myself to not to set this apartment on fire.

As I walked out, I saw an old woman looking up at my library. It took me a long time to collect all of those books; although none of them in particular is really unique, but the combination of them all would be.

‘Last time someone broke into my apartment, I set them on fire.’ I threaten. I don’t know who the woman was, but I figured that fire threatens everyone. Yes, every ONE.

‘Catherine’, the woman spoke in a reverberating, almost like a cat purring, voice ‘Your library is amazing.’

‘Thank you?’ I replied confused. ‘However, checkouts will require you to get a library card.’

She laughed and turned around. My eyes went wild in recognition. She looked young, younger than me and I was barely 30.

She was also really dangerous. So I spoke a word for fire in a language long dead and my candle’s tiny spec of a flame raged into an inferno.

I looked at her again. She smiled.

‘Well, this should’ve worked at home.

I attended a magic show recently and I realized that in a world where we constantly believe that magic is just trickery and slight of hand, a real mage could fit in perfectly.

I also know that a similar book series has been written, in fact it is one of my favorites: Dresden Files by Jim Butcher. I also tried to imagine spell casting a lot like software development: full of mistakes and confusion. 🙂